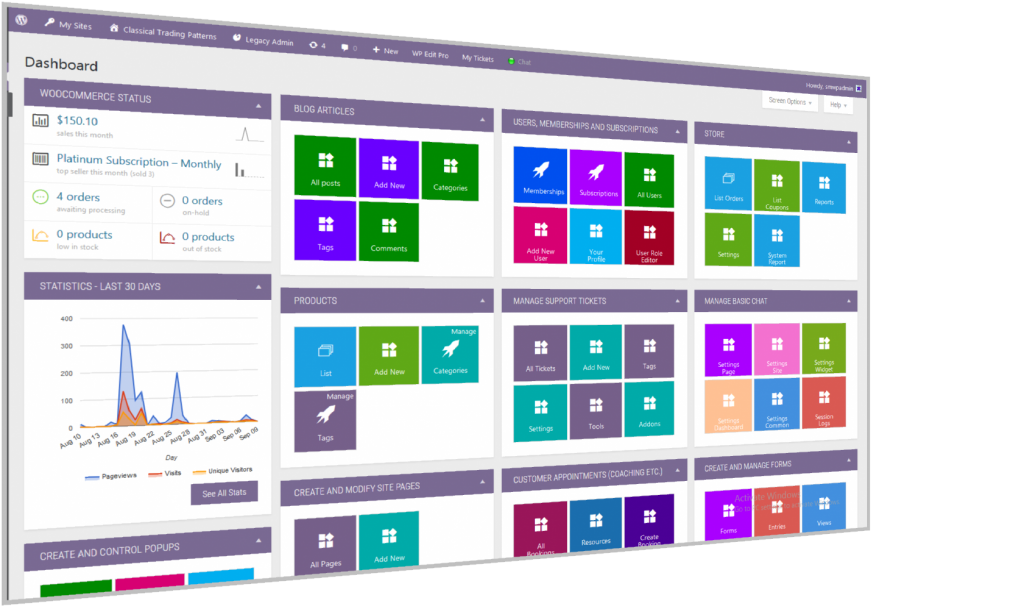 The WordPress administration dashboard can be daunting. Granting access to it to the end user is almost always problematic. There are many tools that allow you to control what shows up on the dashboard, and more tools that allow you to put a custom widget on it. But there is nothing that allows you to create multiple widgets so that you can really create a full menuing system, meaning the end user doesn’t have to see the administration menu or any unwanted items on the dashboard.

This was one of those plugins where we were blazing new trails. As far as we could tell, no one had created anything like this before. Therefore, we ended up selecting a very high-end developer — someone who could make WordPress sit up and bark if he wanted.

The final plugin was fully featured. Multiple widgets could be created, and each widget could contain any type of HTML. Further, each widget could be restricted to one or more roles. And the whole thing has a very sophisticated backup and restore system.

Despite how full-featured the plugin was, by itself it was just a shell for customized content. So we loaded up the opensource METRO style sheets, and went to town creating one widget for each Admin menu option, and then assigning roles to each widget. Combined with shortcodes from another plugin called User Role Editor, we could control each menu option inside each widget. After all was done, a full Admin dashboard would look like this:

Now, with this plugin, an administrator can create any look they want for their dashboard (within the confines of WP of course).